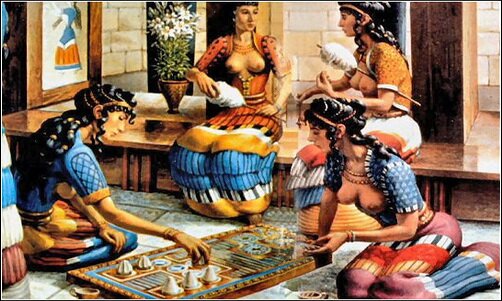 In the heat of an Aegean summer little clothing was needed, and people are generally portrayed as lightly clad.

Men wore a kind of kilt or loincloth, often with a prominent codpiece.

Complete nudity was rare in minoan civilization, though it can be seen in frescoes of young fishermen from Thera.

Women of fashion wore a kind of bolero jacket, leaving their breasts bare, and a long flounced skirt with a narrow waist. Cold-weather costume included tunics and cloaks.

Fish was an important part of the diet, as it still is in the Aegean area. Domesticated animals included sheep, goats, pigs, and oxen, but probably little meat was eaten.

Wheat and barley were the staple grains. Fruits included figs, apples, pears, and pomegranates, and olives were used both as fruit and for oil. Wine was made from grapes. Many spices seem to have been grown, with saffron a special crop, probably used mainly as a dye. Honey was used for sweetening.

Textiles were mainly of wool, though there is evidence of flax production too. In the Greek period a large textile industry flourished, and some of the elaborate fabrics no doubt were intended for export.

Metalwork was produced, and the existence of other crafts can be deduced from the luxury goods found. Agriculture, however, must have been the major concern of the people.
The existence of large, paved open spaces surrounded by shallow stepped banks indicates the Minoan love of watching entertainments, and one fresco shows rows of spectators.”>The main sport that is known appears to have been a form of bull-baiting.

Acrobats, both male and female, are depicted leaping over a charging bull, turning a somersault in the leap.

The acrobats are unarmed, and nothing suggests that the bull was killed. The participation of girls in this sport is eloquent testimony to the emancipation of women.