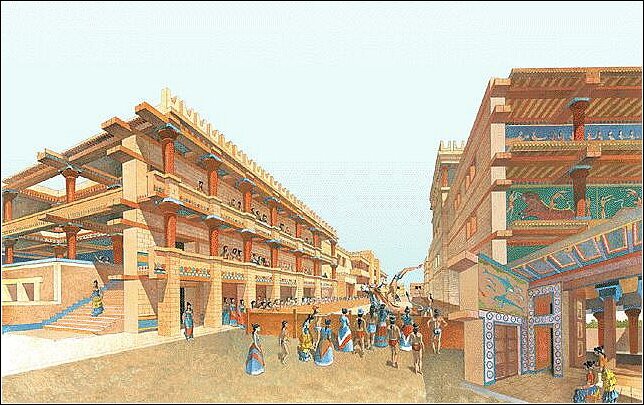 The Minoan Civilization is the culture that flourished on the island of Crete, in the Aegean Sea, during the III and II millennia BC.

It is named after King Minos, who was recorded in Greek tradition as a prehistoric king of Crete.

The Minoan civilization was first recognized as distinct from the Mycenaean civilization of mainland Greece by Sir Arthur Evans, the British excavator of its largest site, the palace of Knossos.

Other palaces have been excavated at Phaistos, Mallia, and Kato Zakros, and new discoveries indicate the likelihood of a palace at Khania in western Crete. Minoan settlements have been found on other islands of the southern Aegean—notably Thera, Melos, Kythera (Cythera), Keos (Kea), and Rhodes. Minoan exports are found throughout the eastern half of the Mediterranean region.

Little was known of the prehistory of Crete before 1900, when Evans began his excavations at Knossos in the central sector of the island near the north coast.

He uncovered the greater part of the huge palace between 1900 and 1905, but work by the British School has continued up to the present, and it is now known that a substantial town lay outside the limits of the palace area.

Near the south coast is the almost equally large palace of Phaistos, situated on an isolated hill in the great plain of the Messara.

The royal villa of Haghia Triadha (Hagia Triada), about 1.5 miles (2.5 km) away, is now some distance from the sea but in antiquity may have been much nearer.

These sites were excavated in the early years of the 20th century by the Italian School.

The palace of Mallia, to the east of Knossos, is a little smaller but was an equally important administrative center.

This was excavated by the French School. Still farther east, a whole small town was revealed at Gournia by an American expedition.